In her famous 1929 extended essay A Room of One’s Own, Virginia Woolf urges women to create their own forms of writing—not to depend on the forms created by men, but to “[break] the sentence … and the sequence.” It’s no wonder women wrote like men in those days. The books women were reading were almost exclusively written by men. Who else were women writers to emulate? I found myself thinking about this as I read Joyce Carol Oates’ short story collection Beautiful Days.

Written nearly one hundred years after Woolf’s manifesto, Beautiful Days checks a lot of boxes for me. Oates has been writing short fiction for decades and is a master of the short story form. Oates’ 1966 story “Where Are You Going, Where Have You Been?” is one of a handful of stories I have a visceral reaction to (Tod Goldberg’s “Ragtown”is another).

Still, “Where Are You Going, Where Have You Been?” was written over fifty years ago. When I sat down to read this new collection of stories, I was curious to compare it, to see Oates’ growth as a writer. It was interesting to see her evolution as a woman and as a human being, too, all set out in the body of her work. The topics she explores in this collection are relevant: infidelity, racism, abortion, death, disease. She approaches each of these issues not only with an artist’s curiosity and a storyteller’s passion, but with humanity and emotion. In Oates’ skilled hands, plots that seems straightforward and ordinary become surprising, powerful, and complex.

I am going to talk about one story, the opening story, to give you a sense of what I mean. In “Fleuve Bleu,” Oates writes about an adulterous love affair in an imagined small town in upstate New York. Her opening is quite simple: she recounts the moment the man first sees his lover standing on a bridge. Her ending is likewise simple, but unexpected and compelling. One of the things I love most about “Fleuve Bleu” is the way Oates takes on telling the story from a man’s point of view. Of course, that’s been done many times before, but I was particularly impressed with Oates’ unique and layered way of doing so. 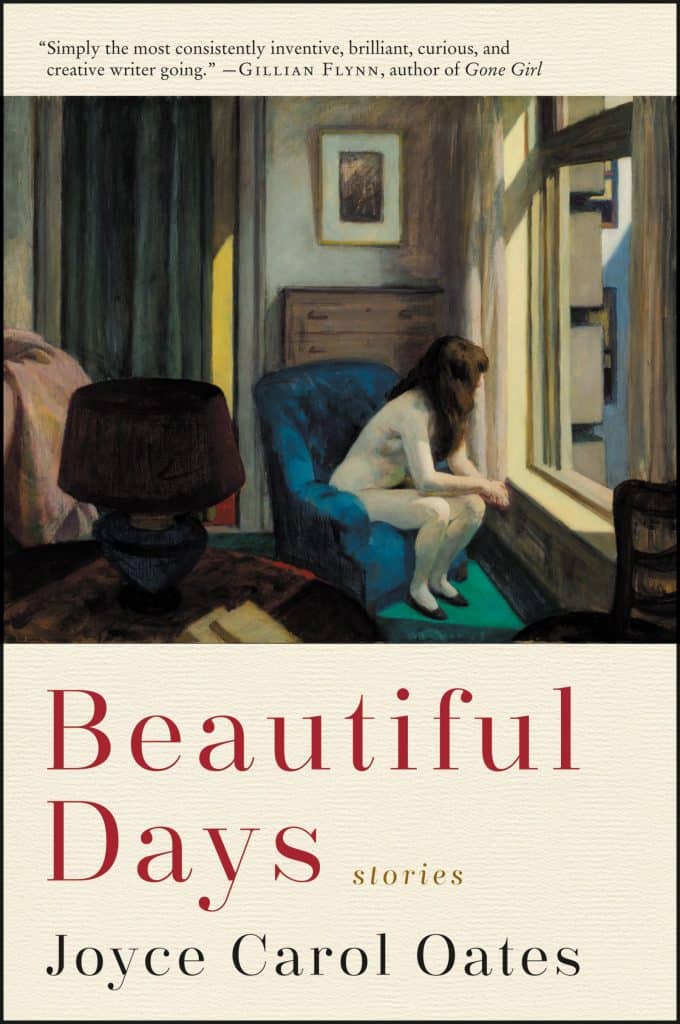 I’m going to take a little detour here, the same detour my brain takes when I consider Beautiful Days. It will lead us back to this place, I promise. In a creative writing class I took some years ago, the teacher asked me and another woman in the class, on separate occasions, about our choice to write male characters. He asked us whether we thought we could do so authentically and with authority. He did not pose that same question to a man in the class who was writing a woman protagonist. Perhaps the teacher felt the man was writing his protagonist successfully and that the other woman and I were not. Who knows?

But this, then, leads me to consider something I heard during a recent online seminar I attended on “Racial Consciousness in Literary Criticism.” I want to attribute the statement to author Miriam Gerba, and I am nearly certain it was her, but there were several others on the panel, so it might have been Lisa Teasley, David Mora, or Eric Braverman. In any case, the speaker was discussing book reviews that are written from a place of hegemony, and as I recall, the speaker pointed out that writers of color living in the United States are immersed in white culture all of their lives. Authors of color can write white culture, and write it well, because they know it. They have to know it, whether they like it or not. White writers who attempt to write characters outside their own culture often make the misstep of not knowing the culture well before setting pen to paper. Gerba (I think) went on to say: “[W]hite writers have to start … realizing that [they’re] writing to America…. [Toni Morrison] urged people to write outside of their experience, but she did not say that we’re obligated to applaud botched attempts.”

I thought about how this same concept might apply to men writing women, and more to the point, women writing men. Do women have a slight edge in writing from the point of view of a man? Are we perhaps more qualified to attempt such a feat? Haven’t we read men and been led by men and absorbed men’s perspectives and opinions all our lives?

In a 2013 piece for The Atlantic, “The Mixed Results of Male Authors Writing Female Characters,” author Michele Willens explores this question:

“‘By default, women have it easier than men when they attempt to craft characters of the opposite sex,’ says novelist Sally Koslow (The Late Lamented Molly Marx), ‘because our whole lives we’ve been reading vast amounts of literature written by men.’ For male writers, trying to navigate the evolving battles of the sexes is more challenging. To their credit, they are not necessarily shying away from tackling women in their work, but are they ‘getting’ them?”

In a recent piece for Air/Light Magazine, “How to Build an Artist,” author Jackie DesForges touches on a similar question—whether women writers are better able to create fictional characters:

“I have to admit it’s an interesting idea. Cis women have an entire organ dedicated to the creation of new human beings. Even those of us who never plan to use our uteruses have to carry them around with us, this constant reminder that our bodies are meant to be used as incubators for other bodies. I wonder if this means we are predisposed to the creation of fictional characters in a way that men are not. I find dozens of scientific and medical articles arguing about whether or not there are differences in the creative parts of men’s and women’s brains. The consensus? A resounding maybe. A Rolling Stone article claims that women actually create more innovative music than men do because women are less likely to be hailed as creative geniuses, so we have to make crazier songs in order to stand out.

“But that’s misogyny, not biology.”

Which brings me back to Oates’ book. What excites me most about several of the stories in the first half of the collection is that Oates not only writes men well but seems to use writing from a man’s perspective to explore a woman’s experience, to tell readers something about women’s lives, to investigate women in relation to men, or to talk about the ways in which women experience men.

“Fleuve Bleu” is only one story in this collection of eleven stories. I’ll leave you now so as not to spoil them for you, but with the assurance that the remaining ten stories become increasingly surprising and fantastic, marching on toward a satisfying conclusion. Oates certainly breaks the form—Woolf would be proud—and it’s a wonder to behold. I was pleased to enjoy these newer stories by Joyce Carol Oates as immensely as I continue to enjoy her earlier work. But I enjoy them in a different and deeper way. Both Oates and I both have traveled a long way since 1966. We are more introspective of where we have been and surer of where we are going.