Boy Parts, the debut novel from British author Eliza Clark, is an unsettling work about gender, sex, and power in the art world set in the North East England city of Newcastle. First published in July 2020, Boy Parts was one of many book releases during the ongoing Covid-19 pandemic to be affected by public health-related restrictions. Launched before vaccines became available, Boy Parts couldn’t be promoted in the “normal” way you’d expect. Combine that with the fact that this is a novel by a Northern, woman writer of working-class origins (something of a rarity in English publishing), and you have a book that’s practically destined to be underrated.

The book draws you in with its cover (designed by Luke Bird), which features an arresting black-and-white photograph of the upper torso of a young white man, probably no older than twenty. His prominent clavicle emanates an air of vulnerability. It’s reminiscent of a Placebo album cover in an indie-noir sort of way, and it stands as an interesting contrast to the trend in recent years of marketing subversive literary fiction by young women with overtly feminine imagery (for example, Ottessa Moshfegh’s 2015 novel My Year of Rest and Relaxation, which uses an eighteenth century portrait of a bored-looking upper class woman on its cover). 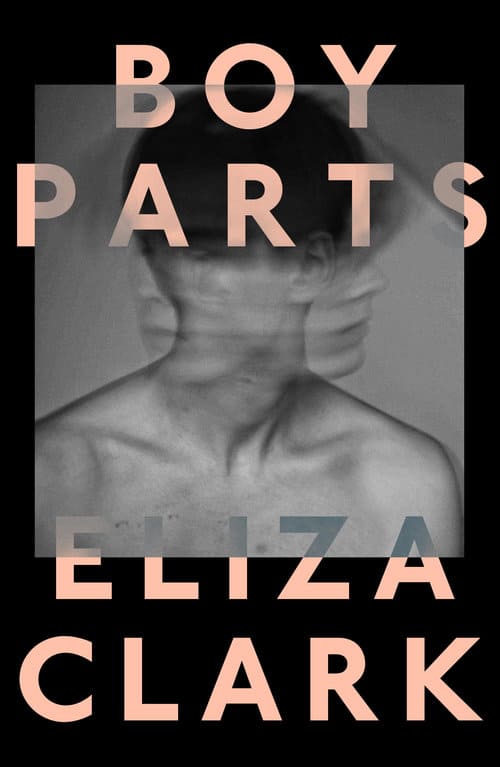 Eliza Clark, who was known for writing “dark fiction” before Boy Parts was published, doesn’t waste much time setting the scene for her story, which is centered around protagonist (or perhaps antagonist) narrator Irina Sturges, a fetish photographer and bartender who is obsessed with taking pictures of random men—Tesco checkout boys, homeless men off the street—in compromising positions. It’s a kooky premise, executed well.

Boy Parts often has the feel of a diary, but we are sometimes taken away from Irina’s first-person narrative with extracts from her email/text exchanges and from the personal blog of her flatmate/frenemy, Flo, which Irina herself reads. Flo’s blogs help flesh her out as a character with her own agency, beyond the pathetic caricature that Irina builds up of her.

The narrative urgency of the book, combined with its generally unpretentious, chatty prose, makes Boy Parts easy to devour quickly. Irina’s brutal honesty, combined with her eye for aesthetics, make her observations of the people around her alternately painful and laugh-out-loud funny (sometimes both).

The first time I laughed out loud, I was three pages in, reading Irina’s description of a loathsome male customer at the Newcastle bar where she works:

“‘I’m a partner, you see,’ says the suit. Received pronunciation—he can’t be local. A Home Counties transplant. A coloniser. He probably lives with all the footballers up in Northumberland and brags to his city-boy friends about how his Darras Hall mansion only cost him a million, how he lives next to Martin Dúbravka, and how, really, quality of life is just so much better up here, as long as you keep away from the rough bits.

“‘My time is very expensive,’ he says.

“‘So is mine,’ I say. He misinterprets this, and slaps a twenty-pound note on the bar, his meaty hands spanking the granite surface like it’s his secretary’s arse.”

Place is central to Boy Parts. Home is Newcastle, and this is embodied in how Irina speaks (her mother is “mam,” not “mom” or “mum”) and how she looks (big hair, figure-hugging dresses, and heels seem to be her uniform, to the chagrin of her more understated London art peers).

Critics have made much of the fact that Boy Parts is a work of Northern fiction, by a Northern author (Eliza Clark is from Newcastle herself), which might seem odd from an American perspective. As someone from Northern England, I can explain. What’s known as the  “North-South divide” gives rise to major inequalities in England, which are perhaps particularly pronounced in the arts. Opportunities and political power in general are overwhelmingly concentrated in the Southern capital. Not only does this materially impact the opportunities Northerners have access to, but on the interpersonal level, Northerners are commonly stereotyped as less intelligent or “cultured” than Southerners, with obvious implications for mobility in the creative industries, where those with decision-making power are unlikely to be Northern.

These experiences of discrimination and stereotyping are written into Irina’s narrative in a way that feels completely natural, like you’re reading the words of a real Northern woman. No doubt Clark’s personal experiences helped her to write these aspects of the character so realistically, although it should be noted that she has stressed in interviews that Boy Parts is not autobiographical; Clark and her protagonist have some things in common but are very much different people!

Irina Sturges deals with the judgment and entitlement of her affluent, Southern peers with an attitude of callousness and detachment. She is written to be unlikeable, a self-absorbed person who is matter-of-fact about how she looks down on others. When she instructs a “boy” (as she calls the men she photographs) to speak when spoken to, and he obeys, she reflects: “I find it quite repulsive that anyone could so openly roll over and show their soft parts to a stranger.”

If Irina’s casual disdain were limited to people who are clearly her social superiors, it would perhaps be easier to apply a sort of postfeminist “girl power” reading to Boy Parts, but her frequent nastiness where other women’s weights are concerned adds complexity. To Irina, Flo is undisciplined for eating carbs, for example: “She never listens to me about food and she’d still be skinny if she did.”. It’s unpleasant, to be sure, but I don’t get the impression that the author is imparting her own views about food and bodies.

The strongest aspect of Boy Parts is how richly Eliza Clark builds the characters who inhabit its world. Their choices may be inexplicable and their actions unrealistic, but Irina and Flo still feel like real people. At less than three hundred pages, it’s perhaps inevitable that the plot of the novel suffers a little as a result. Perhaps it could be tighter, more structured. Criticism aside, when I finished Boy Parts, I had the immediate desire to read it all over again. It is an immersive, rich novel that disorients you and sticks in your brain.

If a late-twenties Aileen Weintraub hadn’t quit her job at a Manhattan-based children’s publishing company back in the year 2000 to work...
Read more
Books

You didn’t think I was finished, did you? No, we’ve got one more round in the ring. This one goes out to arguably the...
Read more