Emma Dreams of Stars: Inside the Gourmet Guide is a full-color manga based on the true story of Parisian Emmanuelle “Emma” Maisonneuve—a foodie who dreams of working at the Michelin Guide. The road to stardom is never easy, as Emma discovers while waiting in trepidation seven months after submitting her job application and hearing nothing but radio silence. The manga follows her journey, from landing the job and becoming the first-ever woman Guide inspector, to tackling misconceptions about being a career-focused woman within a male-dominated industry.

As a manga, Emma Dreams of Stars is a beautiful amalgamation of culture—drawn in a realistic manga style by acclaimed Japanese manga artist Kan Takahama, with a story penned in French by Emma herself, Emmanuelle Maisonnueve, and then translated into English by Julia Pavlowitch, which creates a beauty in its unusualness. Although translated to English, many of the French idioms and expressions that have no direct equivalent are included in French, with footnotes in English explaining them. Not only does this add flavor to the text, but their absence would surely have been noted, as they provide contextual relevance that is key to the narrative.

Early in the story, Emma eats at a restaurant called Le Violon d’Ingres, which loosely translates to “hobby” but means so much more than that—it refers to the famous violinist Jean Auguste Dominique Ingres, a nineteenth century French painter who could also expertly play the violin, and the idea of having a second calling, or not being limited to only one talent or life passion. Its importance is therefore twofold: it’s the name of a restaurant, and it goes some way toward explaining Emma’s desire to work at the Michelin Guide after a successful career as a chef. Not all of us have a second calling in life, but it’s almost inspirational to know that we, as humans, are not built for only one thing in life, and we can change to a new career, passion, or calling partway through our lives without having “failed” in the first. 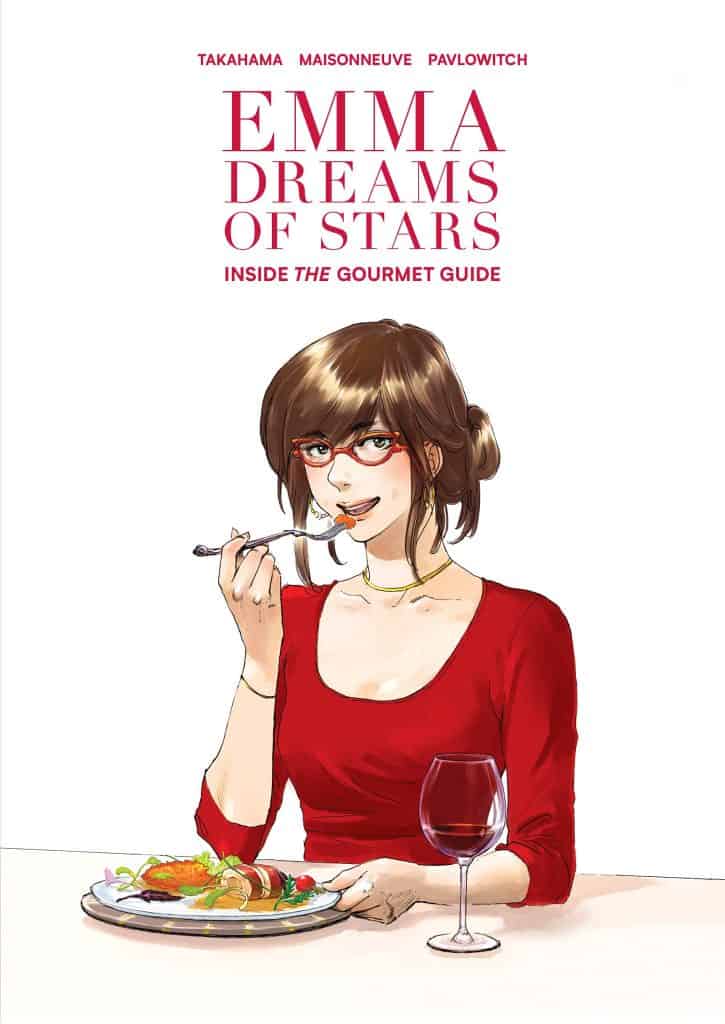 According to Emma, this is a memoir. It is about her life, and yet, although it is clearly based on Emma’s true story, the edition notice at the front of this manga explicitly states that this is a work of fiction. Implying that this work is both non-fiction and fiction creates a juxtaposition of opinions that are at odds. Perhaps a self-written story of one’s own life would be entirely non-fiction? It better lends itself to the genre known as creative non-fiction, where although the narrative itself is true, mostly, there are room for creative liberties, allowing conversations to be written in a way that fits the flow of the story, or entirely rewritten in the spirit or feel of the original conversation. Perhaps we’ll never know which parts were real, apart from the base story itself, and maybe none (or all) of these conversations actually took place. This is a story after all and would be best shelved under creative non-fiction—in the bare bones, there is truth, but it is still a creative tale to liven up what is essentially a reflection about getting a job.

Although the hook of being the first-ever woman inspector at the Michelin Guide is a beacon that lured me in, this manga is light on details—it skims over the actual details of the job, like the literal guidebook of acronyms Emma needs to learn in her role. Her training is briefly covered, with the focus on her innate love of food and overwhelming feelings of imposter syndrome. This becomes apparent in the first chapter when Emma ruminates internally over the meal:

“I need to focus on the flavour.
The softness pairs well with the snap of the green beans.
The variety of textures makes for a great mouthfeel.
Walnut oil, wine vinegar, minced shallots ….
The seasoning is balanced.
The only snag is the way the green beans are cut.
… It’s just a bit awkward.”

And that seems highly intentional. Its narrative form, being told through the medium of manga, is already unusual and injects a fun lightness into a story about a career change. It changes the focus of her story from a fact-based recollection of getting a job to a character study of being the first woman hired in a particular company. Her story becomes highly relatable, taking what could have been a dry topic into a heartfelt recollection of personal struggle and following one’s dreams, irrespective of stereotypes and other obstacles. The objections she faces as a career-focused woman in a male-dominated industry are ones that I, generations later, have also faced. The story will also be relatable to many others, even those working outside the food industry.

That’s where this manga soars—in its personal, relatable narrative that will appeal to readers who find joy in food, as well as those who find inspiration in stories of women faced with discrimination who have followed their dreams anyway. I was pleased to see that this manga is actually the first volume in a series, although only the first volume has been translated into English. I look forward to following more of Emma’s journey in subsequent volumes, as well as learning more about the infamous book that is the Michelin Guide.

If a late-twenties Aileen Weintraub hadn’t quit her job at a Manhattan-based children’s publishing company back in the year 2000 to work...
Read more
Books

You didn’t think I was finished, did you? No, we’ve got one more round in the ring. This one goes out to arguably the...
Read more