Books: Greedy: Notes from a Bisexual Who Wants Too Much

Jen Winston’s debut essay collection, Greedy: Notes from a Bisexual Who Wants Too Much, begins with a scene in which she is gazing at her topless reflection in the mirror with her phone to hand. Upon receiving a one-word text from a mediocre man on a dating app, Winston leads the reader through her thought process: She wants to behave like someone with self-respect, therefore, she will not text him back. On the next page, Jen receives a follow-up message, and her desire for male validation takes over. Yes, she has recently come out as bisexual and subsequently sworn off dating men. But Jen, “a thirty-two-year-old white woman whose AIM handle was once jennibaby069,” knows the rulebook for heterosexual dating by heart, so she takes the easy option. It’s not long before she’s in her match’s bed.

Greedy is a book about being a walking stereotype and knowing it. Winston approvingly quotes fellow bisexual feminist Shiri Eisner:

Indeed, why should bisexuals have to buy into the idea there’s something wrong with liking sex or being unsure of one’s identity?

The work takes the form of a memoir-cum-essay collection. From the title, I had expected something more akin to other books that take a “personal is political” approach to a defined topic, such as British feminist writer Laurie Penny’s 2014 book, Unspeakable Things. While containing autobiographical elements, the focus of Unspeakable Things is on its political arguments. In contrast, Greedy is not so much a political manifesto as an excavation of Winston’s personal history, peppered with political commentary and educational content about feminism, LGBT issues, and more. Writing mostly in chatty, first-person prose that bursts with millennial-isms, Winston also conducts some experiments with form, such as “Bisexuality in Men: A Retrospective,” which lets an email exchange between Winston and an ex do the narrative lifting. Although I feel a sense of cringe at reading something that feels so private, the chapter offers something of a breather from Winston’s highly analytical, self-reflexive writing style; it’s hard to read Greedy without getting the sense that she yearns deeply for love and acceptance, which comes through in a tendency to over-explain fragments from her past that could speak for themselves. 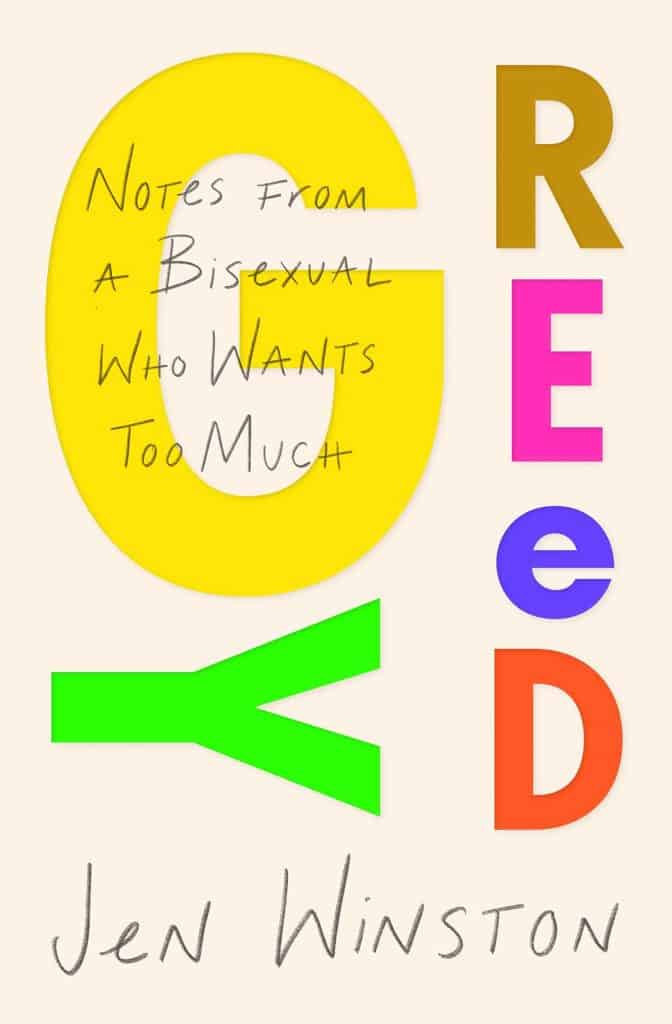 Greedy is as much a book about being a millennial woman as it is a book about bisexuality. Even the way Jen came out (via Instagram) is a total millennial cliché. Jen is constantly looking at herself through other people’s eyes, preempting criticism with copious footnotes. It’s a habit that can be distracting, and part of me feels frustrated by the lengths to which she goes to convey her awareness of her privilege as a white, upper middle-class woman: A few pages in, Jen ends a long passage listing the unearned advantages she’s benefited from in life that have enabled her to write Greedy by advising that, “If you’re wondering whether you should be reading something by a Black, Latinx, Asian, trans, fat, and/or disabled author right now, the answer is yes.” I wonder what this could possibly mean. Does Jen want me to stop reading her book? Surely not. Much later, in “The Neon Sweater,” her account of learning about anti-racism from a fellow white woman at work feels forced and uncomfortably lacking in self-awareness. But Winston also demonstrates an earnest commitment to her feminist principles by giving due credit throughout Greedy to other women whose ideas have influenced her: Mia Mingus, Audre Lorde, Andrea Long Chu, and many more. Her execution may not always be perfect, but I feel like her heart is in the right place, and she is honest to a fault about how long it took her to arrive at her current politics. Winston’s writing is, however, at its strongest not when she’s musing about her privilege, but when she is in professional sex writer mode, talking her readers through the messy hook-ups she had on her way to becoming the openly bi, relatively well-adjusted woman she is today. You may finish the book knowing unexpected new sex facts (Who knew, for instance, that a tampon can be used to give sexual pleasure? Not me). Another highlight is “The Power Dynamic,” a more sober chapter that addresses a formative experience during which Winston and a female friend are both sexually exploited by an older male high schooler. She talks of the aftermath with an admirable level of candor and vulnerability:

Over a decade later, when we gain the vocabulary to describe our traumas, we still rarely use the r-word—it feels so dramatic, a term that doesn’t (or couldn’t) apply to us. Instead we use phrases like ‘bad sex’ to gloss over the details, and everyone knows how to infer. Rather than process these events, we numb them—at first the liquor helps, but soon enough it leads to more pain. We find ourselves drinking and fucking and drunkenly ‘fucking’—a traumatic bisexual loop.

Winston’s description of grappling with an experience that technically constitutes sexual assault, but somehow doesn’t feel bad enough to deserve the label, is powerful and sure to resonate with many readers. More powerful still are her reflections on how the experience impacted the lengthy process of her coming to terms with her sexuality.