The first time I experienced Lori Gottlieb’s book Maybe You Should Talk to Someone, I read it in print. The second time, I listened to the audio version, which is read by Gottlieb. The experience was akin to relishing a favorite film, again, for the first time. Full of vulnerability, whip-smart humor, and insightful wisdom, this book is one part narrative nonfiction, the other part memoir. 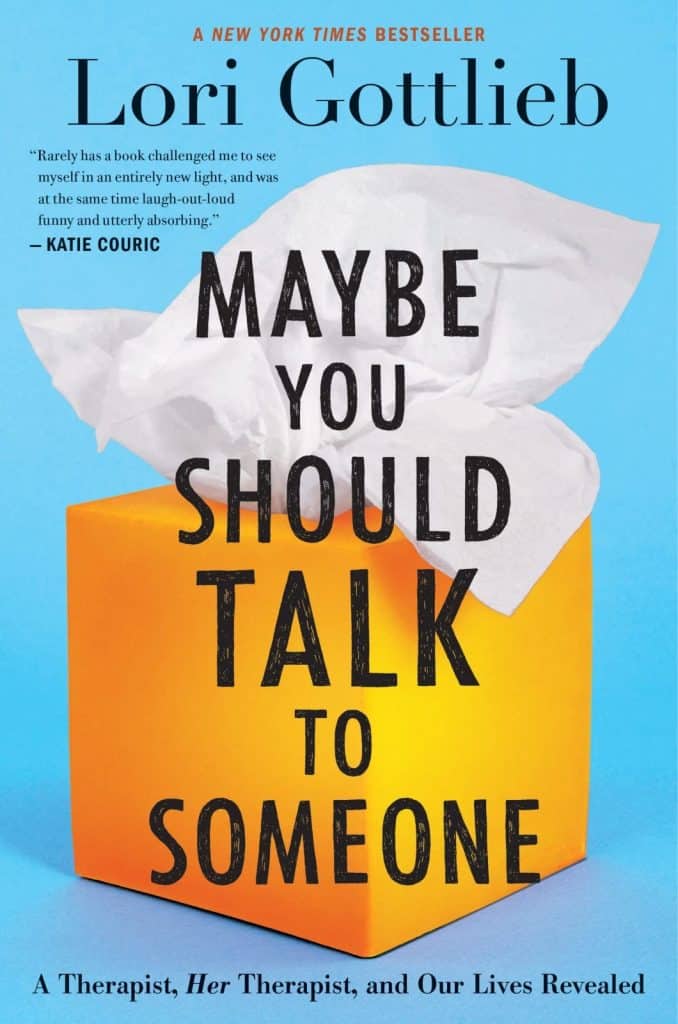 During my reencounter with Gottlieb’s book, I was on a quest to find a new talk therapist, a pursuit I scarcely mentioned to anyone. It is not considered taboo to share personal details with friends, family, or the collective social media audiences about physical ailments like cardiac disease, gastrointestinal disorders, or kidney stone flare-ups. To prattle on about medical diagnoses, ad nauseum, to anyone who will listen, is commonplace. But willingly revealing and being comfortable with discussing emotional or mental health struggles, forget about it. Until recently, mental health issues have been unconventional topics of discussion. Thanks to Maybe You Should Talk to Someone for its contribution to making mainstream conversations about mental health more acceptable.

In her book, Gottlieb asks, “But what are we afraid of?” Author, psychotherapist, and “Dear Therapist” columnist for The Atlantic, Gottlieb explores this notion of talking about those hidden facets of ourselves—an examination. “It’s not as if we’re going to peer in those darker corners, flip on the light, and find a bunch of cockroaches. Fireflies love the dark too. There’s beauty in those places. But we have to look in there to see it.” While this book is not therapy, it is a story about therapy—the author’s experiences and those of a few of her patients. The book’s fundamental question is, how do we “reveal our shared humanity so that we can see ourselves more clearly?” Ideally, the revelation brings about change, a remedy for the lack of motivation for which therapy was sought in the first place.

Gottlieb knows how to tell a story—she is well-trained in that art. After graduating from college, her career’s trajectory initially began in Hollywood, first as an assistant to a film agent and later as an entry-level film executive. She eventually landed a job at NBC working in television.

“I was in the room when Jennifer Aniston and Courteney Cox auditioned for starring roles in Friends,” Gottlieb writes. “I weighed in on whether Julianna Margulies’s character in ER should die at the end of episode one, and I was on the set with George Clooney before anyone knew how famous this series would make him.”

Because she is a writer and former script reader, the pace of Gottlieb’s book naturally exhibits film-like qualities. Gottlieb transports the reader and delivers a two-sided, fly-on-the-wall lens into the opaque lives of five patients, one of which is Gottlieb herself. Her patients are vastly different—a narcissistic Hollywood producer grapples with a turbulent marriage, a young newlywed faces an incurable disease, an elderly artist threatens to end it if life does not improve within the year, a twenty-something repeatedly chooses harmful relationships, and a talented therapist (Gottlieb) struggles after her wedding plans are unexpectedly called off by her fiancé. But these are not characters in a film—these real-life people’s stories share a common thread—their experience of the human condition. In the face of their most private therapy moments, each person encounters their own version of the universal question: what does it mean to be human?

In her roles as the author, the psychotherapist, and inside her own psychotherapy sessions, the patient, Gottlieb illustrates a vital point: “There are many ways to tell a story, and if I’ve learned anything as a therapist, it’s that most people are what therapists call ‘unreliable narrators.’ That’s not to say that they purposely mislead. It’s more that every story has multiple threads, and they tend to leave out the strands that don’t jibe with their perspectives.”

From inside the therapy room, the reader is a witness to what occurs during sessions. During an appointment with her patient John, the narcissistic Hollywood producer, John rants to Gottlieb about his crew members’ ineptness, referring to each one as “The Idiot.” While John spends more time talking about The Idiot, rather than confessing the real reason he is seeking counsel, Gottlieb’s own internal dialogue is whirring.

“What John doesn’t know is that I’m reeling from last night, when the man I thought I was going to marry unexpectedly called it quits. Today I’m trying to focus on my patients (allowing myself to cry only in the ten-minute breaks between sessions, carefully wiping away my running mascara before the next person arrives.) In other words, I’m dealing with my pain the way I suspect John has been dealing with his: by covering it up.

“As a therapist, I know a lot about pain, about the ways in which pain is tied to loss. But I also know something less commonly understood: that change and loss travel together. We can’t have change without loss, which is why so often people say they want change but nonetheless stay exactly the same. To help John, I’m going to have to figure out what his loss would be, but first, I’m going to have to understand mine. Because right now, all I can think about is what my boyfriend did last night.

“I look back at John and think: I hear you, brother.”

In this scene, the author’s vulnerability emerges; readers are allowed a visceral connection and are offered a relevant vantage point from which to observe their own uncharted paths. Throughout the book and its evaluation of herself and her patients, Gottlieb reminds readers that, despite having our own sets of longings and insecurities and histories, we have one vital commonality: we are all human. And it is through this humanity that each person’s story begins.

For the audio version, Gottlieb reads fourteen hours of riveting storytelling that ends far too quickly. Within the storyline of each talk therapy session, the people come alive cinematically. To spend time with them and to get to know their complicated and powerful stories is an exquisite gift. The reminder that these complex therapy patients are real people assures readers they need only be human for this book to resonate with them.

Maybe You Should Talk to Someone is currently in development as a television series.

Rachel Krantz, whose author headshot makes her a dead ringer for my younger cousin Beth, is a Jewish woman writer in her thirties, as...
Read more
Books

Women and the West: Willa Cather’s Feminist Perspective of the Wild Countryside

It all started with a conversation over omelets in a booth at the Breakfast House. I was in my senior year of high school,...
Read more
Books