Midnight Champagne by A. Manette Ansay

Author A. Manette Ansay was born and raised in the Great Lakes region of the United States. She had dreams of becoming a concert pianist, but when she was nineteen years old, she developed a muscle disorder which gradually left her unable to walk and, for a time, completely bedridden. She was forced to leave the Peabody Conservatory of Music. By the time she was twenty-two, Ansay realized she couldn’t do any kind of work which required standing. She eventually decided to take up writing, something she could do while seated. She had already earned an undergraduate degree in anthropology. She earned a second degree in creative writing, and on January 1, 1988, she made it her New Year’s resolution to write for two hours, three times a week. The following year, she was accepted to Cornell University’s MFA program, graduating in 1991. She started writing and publishing short stories.

In 1994, Ansay published her first novel, Vinegar Hill. Five years later, it was named an Oprah’s Book Club selection. In Vinegar Hill, Ansay’s protagonist, Ellen Grier, seeks freedom from an unhappy marriage, as well as from the suffocating expectations of relatives, religion, and society. Ansay has since published six novels in all, as well as a short story collection and a memoir, Limbo, which delves into the ways in which her medical condition closed some doors but opened others. 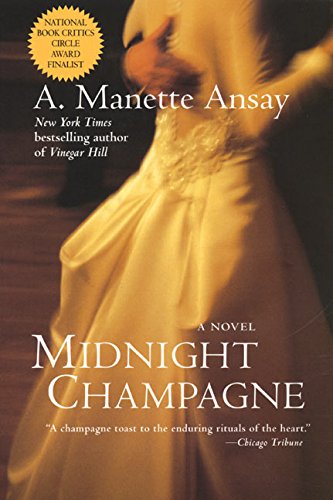 While Vinegar Hill remains, perhaps, Ansay’s most popular or well-known novel (and I certainly love and recommend that one too), my favorite of Ansay’s novels is Midnight Champagne, which was a finalist for the 1999 National Book Critics Circle Award. It is funny and sad, heartbreaking and hopeful, joyous and tragic. It is literary fiction but borrows evocatively from the horror genre. It considers love and marriage in their many stages, as well as feminism, domestic violence, and the haunting nature of love lost.

Perhaps my favorite among its themes is the idea that people sometimes marry to escape being alone but may find themselves loneliest of all within the confines of marriage. Still, longing is centered in her stories. “For art is about desire, is it not, and never its consummation?” In her novel Good Things I Wish for You, Ansay writes: “Infatuation is the inciting incident. Maybe it goes somewhere, maybe it doesn’t, but you can’t have a story without it. Love is the story itself, the thing we carry with us after the mountains are gone.”

As Midnight Champagne opens, a young Midwestern couple is about to get married at the Great Lakes Chapel and Hideaway Lodge in Wisconsin. It’s Valentine’s Day, and they’ve purchased one of those all-inclusive, prepackaged weddings—both ceremony and reception—complete with music, dancing, and a cash bar. The wedding includes every cliché imaginable—from the bouquet toss to the champagne toast at midnight to the king-sized, heart-shaped bed in the Lodge’s honeymoon suite.

The young bride’s family is surprised at the suddenness of the ceremony. After all, until recently, everyone thought April would marry Barney, her long-time suitor. But now here she is about to marry Caleb, a man she’s been dating for only three months. Embarrassingly, Barney was accidentally invited to the wedding, and even more embarrassingly, he came. He sits at a table, staring and brooding throughout the festivities, seemingly as surprised as anyone else that he is not the groom. Through flashbacks, we learn why April is choosing to marry Caleb.

“The bride and groom clasp hands gratefully. It’s a terrible thing, to be alone. They stand one last time beneath the balcony, see themselves mounting those winding stairs before most of the people they love and more than a few they don’t. Before full-blown ghosts of past disasters and new ghosts clamoring to be born. Before the ancient flourishing grief between women and men. Still, they will promise, without hesitation, to love and honor and cherish in richness and poverty, sickness and health, speaking in time with the rhythm of their hearts: I do, I do, I do.”

Meanwhile, in Room 33 of the Lodge, another marriage is about to end. Tension between a quarreling couple escalates and builds toward a brutal conclusion. The juxtaposition between new, innocent, and perhaps naive love, and the reality of ill-advised marriage, is striking. As the two stories unfold over the course of the evening, the ghost of the Lodge’s former owner, a vibrant, brash, and sassy woman in red who was murdered by a jealous lover, guides the parallel story lines to a shocking intersection and an unexpected finish. In a satisfying conclusion, Ansay perfectly captures Aristotle’s suggestion that an ending should be “surprising but inevitable.”

Midnight Champagne was published twenty years ago and stands the test of time. Ultimately, it is a story about love, marriage, secrets, divorce, and eternal optimism. It is by turns humorous, suspenseful, and thought-provoking. The story’s surprising twists and turns will sweep readers along from beginning to end, just as if they were guests at a well-orchestrated wedding celebration. This is one of those books readers won’t be able to put down until they’ve finished it. Even then, the book won’t leave them easily—they will be left haunted by its dramatic conclusion. Twenty years after it was first published, it deserves a contemporary audience.

Besides the writing itself, which is incredible, another thing that draws me to Ansay’s work is the artist’s own optimism and resiliency. Her personal story is a motivating one. While she has never received an official diagnosis of the medical condition which left her unable to walk many years ago, and continues to have recurring symptoms on an occasional basis, Ansay’s health has improved significantly. Her work has garnered much critical acclaim, including a National Endowment for the Arts Grant, a Pushcart Prize, the Nelson Algren Prize, two Great Lakes Book Awards, and numerous fellowships and residencies, including Ragsdale, Bread Loaf, and MacDowell Colony. She taught for many years at the University of Florida, retiring Professor Emeritus last June. She now lives near Kansas City with her husband and daughter.