If there’s one thing I can say about Los Angeles, it’s that the city is a mess, and quite frankly, I don’t think I’ve read any book that hits this particular mess so squarely on the head more than The Pink Hotel by Liska Jacobs.

The Pink Hotel begins with newlyweds Kit and Keith Collins arriving at the Pink Hotel in Beverly Hills, where they’ve been invited to honeymoon by the hotel’s general manager, Mr. Beaumont. It’s Keith’s chance to score a management job and become Mr. Beaumont’s right-hand man and Kit’s to dip her toes into this life of opulence her husband so desperately wants for the two of them. When summer fires begin ravaging the city, the elitist residents of LA and Hollywood take refuge in the hotel’s grounds, throwing parties, throwing money, and pretending like nothing else in the world exists. As the city burns and the air thickens, the luster of wealth tarnishes, and the disparity between the guests and the staff bubbles. Lines blur, and “there’s a whispering in [the guests’] blood, a tingling in the timber of their bones. Something is going to happen, something always happens at the Pink Hotel. The anticipation has made them insatiable.” Chaos is everywhere: in the hallways, in the fancy bungalow guest houses, and at the pool. No one is spared from it, and the worst is brought out in people who are already pretty shitty. 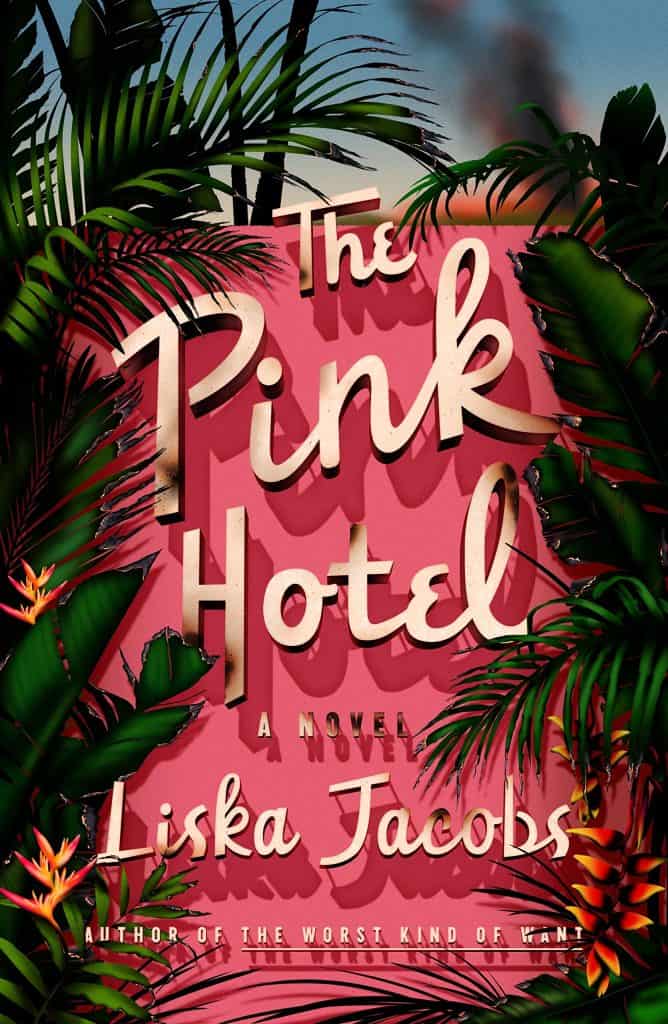 I’ll start by saying that LA is full of truly despicable people, mostly rich. And they do not care about you, even if you’re one of them. Even if they’re showering you with attention and metaphorical gold, like they do Kit and Keith and other “prized” hotel staff, they’re on their own untouchable level. Jacobs drives this point home pretty well, I think, especially by the end, when it’s glaringly obvious that people like Tigran and the Laceys, the tip top hotel guests, have no concern for anyone but themselves. They really do treat others’ lives like a game, like Keith and Mr. Beaumont are playthings for their own personal entertainment. Marguerite Lacey acts like Kit is her own life-size, dress-up doll, giving her clothes and taking her to parties and parading her around like she’s not a real person.

We all know the rich are terrible people, even when they try not to be, and yet, so many of us are still Keiths, still Cocos and Ethans, still every member of the staff who think that because they party with the Laceys, they have a chance to be their equals. I’d be lying if I said I wouldn’t accept a week away in a fancy hotel or a party invitation from a socialite. I’d like to think I wouldn’t sell out, like the staff does a bit by participating in messy wrestling matches for money, but that’s what LA does to people. Sometimes, it can feel like a vacuum, like these people and their glittering lives are all there is.

One thing I liked a lot about this book is that every scene is so stunningly detailed. I felt immersed. Jacobs really captures the scenes, writing them in a way that made me forget we were in the present day in the real world. And then she’d snap back to remind me that this isn’t a fantasy, and we’re all in hell:

“In this queer lighting, everything is muted. The lemon trees that separate the Cabana Cafe from the pool, the potted lavender, the bougainvillea-covered walls. Then the wind kicks up, the haze shifts and parts. The sun is coming out. Technicolor clicks on and Dorothy is in Oz once more. The lemons are yellow, the lavender purple. The sky the tranquil blue of surrender. Impossible that this afternoon a protest at City Hall turned violent. Riot police with their batons, firing tear gas into crowds, rubber bullets too. [Kit] had read it on her phone. The headlines, the hashtags and live videos.”

Jacobs takes a third person limited point of view that bounces largely between Kit, Keith, Mr. Beaumont, and Coco. This was not my favorite choice at first. Sometimes it was a lot to follow, and it switched heads a bit abruptly a few times. One unreliable narrator is usually enough for me, but in the end, I was mostly fine with it. It allowed me to, one, see how screwed up everyone and their motivations are, and two, see that the staff might be just as blind as the rich hotel guests. Like when Mr. Beaumont and Coco look down on Keith for being such a try-hard when they’re never going to fit in with the hotel clientele either. There’s a moment in the novel where Mr. Beaumont’s blindness made me laugh out loud (but not in a funny way): “He does not like to be reminded of his guests’ darker whims, of basic human ugliness. He much prefers when they behave with the decorum befitting that of millionaires and billionaires.” Befitting!? Oh, my man, they are behaving exactly as expected, like clockwork. The amount of time I spent yelling at the pages, wanting them all to wake up to reality, to care about someone else for non-selfish reasons … needless to say, I was rooting for it all to burn to the ground.

The Pink Hotel is more character-driven than plot-driven, but everyone who knows me knows how character-driven stories really get me, especially when the characters are imperfect and don’t make it easy to root for them. Although I wasn’t necessarily in their corner, I did find myself wanting things to work out for Kit, Coco, and Marguerite. To me, they were the characters who, despite falling under the spell of glamour, could recognize that glamour isn’t all it’s cracked up to be. Marguerite less so, of course, being one of the Laceys and therefore swallowed by money and glitz, but I could feel that she was left wanting by it all. That if she stepped away from it, she could be happy. Maybe even thrive.

The Pink Hotel and its glossy, gilded walls will be on my mind for a while in the heat of this LA summer. Was it all worth it for one week of thrill? Would they do it all over again if they could? I think they just might.